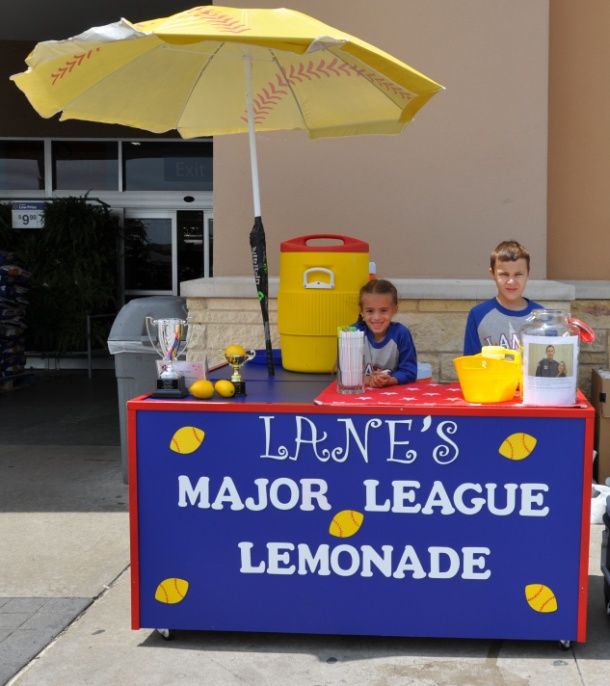 The fire roars as the flames continue to grow, filling the house with smoke. Off in the distance, you hear sirens coming closer. Firefighters jump off the truck and race into the blaze fearlessly. We may have witnessed firefighters responding to emergency situations, but who responds when a firefighter is in need?

Eleven-year-old Lemonade Day participant Lane Sopko raised money for Killeen firefighter Patrick Bergman, who was recently diagnosed with a rare brain tumor. In the past, Lane has donated to homeless shelters and animal shelters, but since his dad is a firefighter, this cause hit home.

Lane has participated in Lemonade Day for four years, and after attending Lemon U (a one-hour workshop that provides an overview of the entire Lemonade Day curriculum), he was inspired to rebrand his image. Since Lane would like to be a professional baseball player someday, Lane’s Major League Lemonade was created.

Lane was very eager to get home to start rebranding his baseball-themed stand, but, at the same time, he wanted to incorporate Lemonade Day. Lane found a yellow umbrella and painted red stitching on the top to make it look like a baseball. He also decorated his stand with lemon-shaped baseballs. A month before Lemonade Day, Lane wrote letters asking for permission to set up his lemonade stand at local businesses, and he decided he would do his stand on Saturday and Sunday at different locations. He advertised his locations and business hours on Facebook during the weekend of Lemonade Day. Patrick was so touched by Lane’s efforts to help him that he went over to Lane’s house and squeezed lemons!

For Lemonade Day weekend, Lane hired 5-year-old Piper Thomson as his intern to help with customers. He served fresh squeezed lemonade, rosemary blackberry lemonade, and Arnold Palmers. On Saturday, they sold out in four hours, and on Sunday, they sold 16 gallons of lemonade! He brought in $1,022 from selling his lemonade that weekend. Two weeks later, Lane and Piper presented a check at Killeen Fire Station No. 3 for $744.00 to help pay for Patrick’s medical bills.