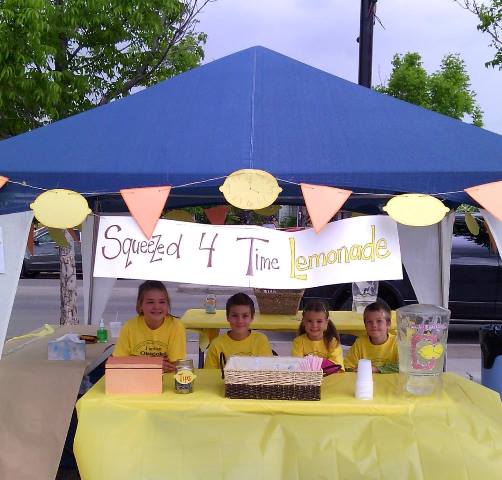 We awarded the Okotoks Entrepreneur of the Year award to Squeezed 4 Time Lemonade Drive Thru,operated by the Drayvin, Mercedes, Deklun, Maydin Whitney.  The award was based on a combination of financial results and their reflection of the days’ events.  The financial review represented 50% of the total score; 20% - Lemonade Sales, 20% - Other Sales and 10% - tips and donations.  We considered the inclusion of Net Profit and /or the donation amount in the financial review.  However we did not include the Net Profit as a factor this year as there was inconsistent reporting of expenses.  We considered the inclusion of the donation amount as part of the criteria, however donation amount is a subjective decision based on entrepreneurs objective.  Instead of including donation amount we simply considered whether they made a donation to a charity of their choice.Squeezed 4 Time Lemonade Drive Thru was second in the financial review.The second part of the review was a subjective review of the lemonade entrepreneur’s reflection of the day.  The ultimate decision to award the Entrepreneur of the Year to Squeezed 4 Time was based on their ability to identify an awareness problem early in the day and make the modification necessary to result in a successful day.

Okotoks first Lemonade Day was a tremendous success.  As with any inaugural program, there were several challenges that needed to be overcome.  The schools were initially reluctant to allow us to talk with the kids because the school systems are often approached with fund raising program.  The Okotoks business community is very support of the local events, however they needed to familiarize with the program and objectives.  Our local print and radio media was amazingly supportive, providing several sound spots, interviews and articles about lemonade day.  In the end, the message of Spend Some, Save Some, and Share Some was a message that resonated with everyone.  We totally anticipate that the items that needed to be overcome this year will not be a problem next year and anticipate a large increase in participation from both lemonade day entrepreneurs, local businesses and sponsorship.  All school systems have already indicated that they are on board for next year and local businesses were asking to be more involved for the 2016 event.It is difficult to put into words the impact of the Lemonade Day on the 2015 Lemonade Day entrepreneurs and their parents.  As an organizing committee, we accomplished a goal to change the lives of some of local kids and their parents.  On Lemonade Day, our organizing committee visited with both the entrepreneurs and their parents.  A reoccurring theme in conversation was the parents amazement about how much their children changed through the process of starting their lemonade business.  The kids changed in terms of their ability to communicate with local business people and communicate with their customers.  Kids are bombarded on a regular basis about “Stranger Danger”which impacts their opportunity for interpersonal communication; Lemonade day allowed them to interact with people.  This interaction with local entrepreneurs and customers will increase their confidence in all aspects of life.  Although the school year was almost over when we had Lemonade Day, the teachers and school administration have already commented on the changes they have seen in the kids who participated.On a few occasions, parents indicated that they saw their children is a different light and started to appreciate what their kids are actually capable of.  One of the participants parent reflected to me that in the past their son was very introverted and shy and would have mom take the lead on purchases of any sort.  After Lemonade Day, they needed to purchase a new bicycle for their son, however on this shopping trip, their son did all the talking with bicycle sales person; mom just stood there is shock.In summary – In Okotoks, we changed lives for the better.  It can only get better and bigger from here.