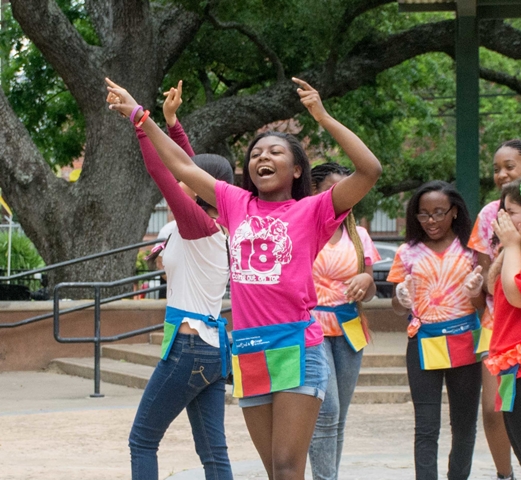 Meet Jasmine! She’s a 14 years old 9th grader and a youth entrepreneur! She participated in Lemonade Day 2015, and was awarded The Youth Entrepreneur of the Year Award at The Lemonade Day Entrepreneurial Excellence Awards.

Jasmine Burrell is a typical 14 year old who loves to dance, hang out with her friends, binge on Netflix, read teen novels, and lives on her cell phone.  She’s a high school sophomore at Young Women’s College Preparatory in Houston, Texas; and, usually her summers are filled with science and engineering camps at various college campuses across the country.  But, this summer Jasmine is doing something different… she has declined summer camp offers to Purdue and Stanford (two of her dream schools) to focus on another dream… establishing her own business.

After six years of running lemonade stands with Lemonade Day Houston, Jasmine has decided that she has the skills, the confidence, and the grit to launch her baked goods company.  So, this August, J’s Goodies Jars will debut at farmer’s markets, festivals, and fairs.  And, by spring of 2016, Jasmine hopes to have her products in retail outlets and local restaurants.

How did Jasmine get here?  It was really fate. One afternoon, Jasmine accompanied her mother to a meeting with faith-based leaders where Michael Holthouse shared his story (or rather his daughter’s story) of how Lemonade Day started because Lissa wanted to buy a turtle.  The story struck a nerve with Jasmine because she also wanted a pet and her parents had refused.  But, it also inspired her because she understood that if she had a plan to raise her own money; her Dad was less likely to refuse her request.  So, on the way home, she talked through everything that she could do if she had her own money.  Her mom reminded her that she was still a child so there would still be limits on what she would be allowed to do.  Jasmine heard her Mom, but she also heard Michael Holthouse and that her freedom was connected to building her own and having her own.

Jasmine’s first stand was cute and simple.  She decided that she would first help someone else and recruited her brother and two other friends to work a stand at the Wal-Mart near their church.  Their goal was to raise $300 for the church’s youth ministry Vacation Bible School.  In spite of the rain and some not so friendly customers, the group raised over $500 and Vacation Bible School was a success!  And, Jasmine was fully bitten by the Lemonade Day bug.

The next year, Jasmine participated in the Best Tasting contest.  She didn’t win, but she DID meet some wonderful Lemonade Day ambassadors.  And, most importantly she learned that taste DID matter, so she worked on her lemonade recipe to make a better tasting product that people would want to buy.  She also noticed that some of the stands were very well organized and professionally done.  That year, Jasmine worked her stand alone and earned over $400 with her new recipe and better designed stand.  Over the following years, Jasmine ran a Lemonade Day stand.  Her average profits were $350 and each year she learned some new about business strategies.  This year, Jasmine ran her last Lemonade Day stand with her classmates.  They raised over $400 for their class activity fund.

While Lemonade Day is something that Jasmine is passionate about, she believes that it is time for her to retire at the ripe old age of 14 and serve as a coach to her nephew, Jaedon, and Girl Scout Troop 22059; as, they are both very involved and excited about Lemonade Day.

Besides, Jasmine hopes that J’s Goodie Jars will keep her very busy for the next few years.