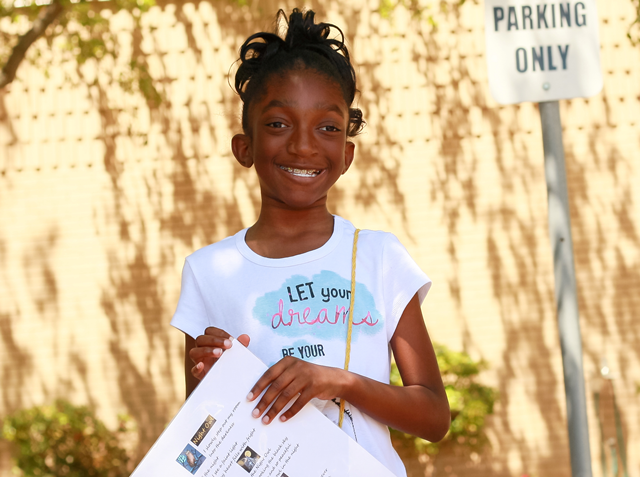 Jaida Holley sees herself as a kite. She describes how each kite is different by the way it flows, the style and the shape. Jaida said, “I like to stand out and be my own person. Basically, I am a different kite that will fly high into the sky trying to reach the highest point (the sun).”

When Jaida was born, she was diagnosed with sickle cell disease, but she does not let this disease stop her from doing anything she wants to do.  At the age of 10, Jaida wrote her first book for Lemonade Day 2014. When Jaida first heard about Lemonade Day from her mom, all she knew about the program was that it helped kids become entrepreneurs. Her mom gave her the idea to do something different besides selling lemonade. She remembered that in first grade, she had a goal of publishing a book. Jaida used the Lemonade Day lessons to help her publish her first book called 10 Short Stories and Poems from the Mind of a 10 Year Old. Jaida faced some challenges during the process. She said, “First of all, not everybody believes a 10-year-old can write a book and publish it. I never really had to write a book on a deadline; I have always come up with ideas and started writing them down and over time go back to them to write a little bit more.” With Lemonade Day around the corner, she had only two months to wrap her book up. Jaida said, “I have always heard about publishers saying, ‘I need you to write three books this month, and you have to do it by this time.’” She felt she was a big time author when dealing with time management.

Lemonade Day taught her the value of having a plan and following the steps in order to accomplish her goal. Without going through the entrepreneur workbook, she felt her book would’ve come out all wrong. Jaida said, “My mother told me I could use excerpts from the other books I was working on. The first time I did it, it came out a little crazy.” Jaida went back through her old spirals to find the perfect stories. She decided to place an excerpt from her next work in progress, The Glossy Girls, at the end and publish the rest of the story in the fall. She said, “A lot of my stories were action packed. I had such an imagination with everything going on.”

After doing Lemonade Day, Jaida decided to continue her writing and publish more books. Jaida has started her writing career and plans on writing 10 books by 2020. Jaida has also attended two book signings, which were hosted in Houston and Killeen, Texas. During the Wealthy Sisters Network, she was able to meet many publishers and gained valuable advice to help her with her writing. Jaida said, “They told me to keep writing.” Jaida was featured in an online magazine called Be the Boss.

Jaida is a proud sister of one brother, who is 28 years old. She gets really excited when he is able to come down and visit her. Jaida said, “He has always been so proud of me.” He tells her how she has inspired him. After the loss of her twin sisters, Jaida was always there to comfort and hold her family whenever she felt they needed a hug. Jaida’s pride and joy is her Shih-Tzu dog named Diesel. Even while being an author, she still finds time to be a 10-year-old girl. Jaida loves to read. She said, “I can just escape into another world.” Jaida learned how to do ballet and tap dancing when she lived in New York. She enjoys drawing, skating and movies.

Jaida has high goals in the future. She said, “I want to own a nonprofit organization to help decrease dropout rates in the U.S. I want to do tutoring and help kids learn to read. I also want to be a writing coach, and I want to sell my books, of course! I want to help kids who have lost newborn siblings, because sometimes that can be tough too.” Jaida doesn’t like the idea of working for someone else; she likes to be her own boss!

Jaida’s book can be found on Amazon.com.