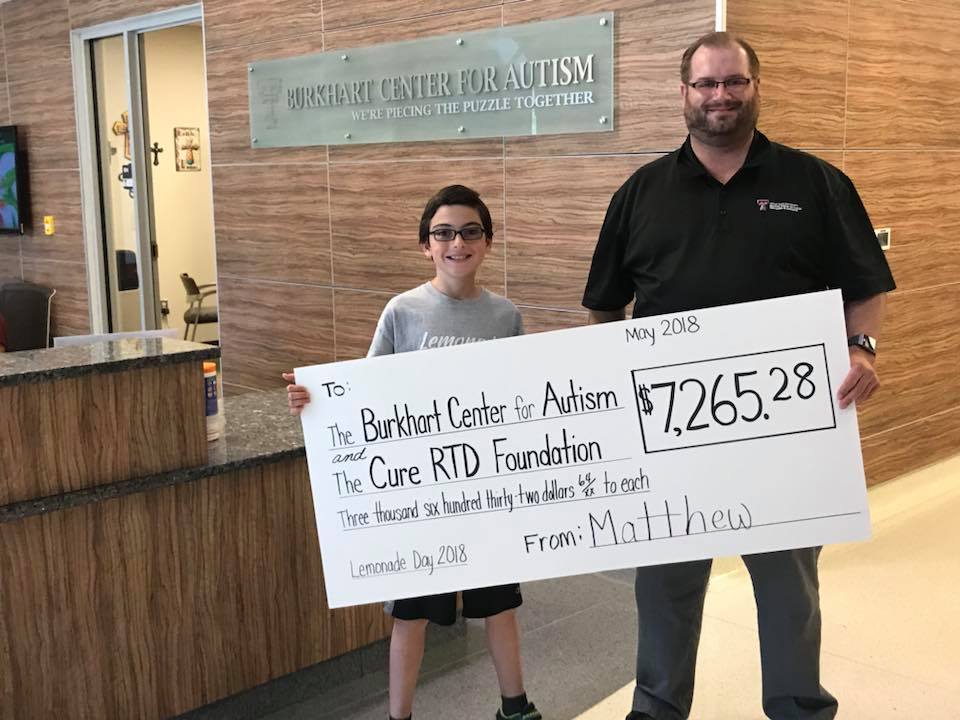 Matthew Noel is a fifth grader at Bennett Elementary School in Lubbock, Texas. In 2017 Matthew’s Rockin’ Lemonade Stand generated $1,210.10 in profits in a single day. He improved on his formula in 2018 and brought in $1,677.18 in one-day profits. Through participating in Lemonade Day over the past few years, he has so far raised a whopping $12,257 for charity. After four years as a Lemonade Day Entrepreneur, 2018 was a record year for Matthew. He has specific goals: “I do Lemonade Day to learn about business, to be my own entrepreneur and make customers happy, make some money and donate lots to the Burkhart Center for Autism.”

Matthew amazed everyone at his Rockin’ Lemonade Stand. As he explained, he has learned many things in his many years of doing Lemonade Day. This year, he offered many choices of lemonade, cookies and brownies…and his signature innovation was 24K Lemonade for $50/glass. He sold plenty of these because each glass was accompanied by Matthew’s personal rendition of Bruno Mars’ 24K Magic. He publicized his efforts to all his friends and made sure there were different price points so he could offer something to everyone.

Matthew explained that each year he learned more, got better, and took risks adding new products. His profits improved from $200 in the first year (when he was only in grade one), $275 in year 2 and then $375 in the third year. But he rocked it out of the park in 2017 and 2018. Matthew noted that while he worked harder and made an amazing $1,210.10 as his base profit in 2017, the real innovation was finding sponsors who agreed to match his donation to the Burkhart Center for Autism. The end result allowed Matthew to give significantly to charity with a check for $4,464.01 in 2017. In 2018 he upped his efforts at his lemonade stand and in fundraising so that he could donate to two charities, the Burkhart Center for Autism and the Cure RTD Foundation (RTD – Riboflavin Transporter Deficiency is a life-threatening, neurodegenerative genetic disorder that robs a person of the ability to hear, see, move, walk, eat and breathe. Matthew’s youngest cousin has RTD). He made $1,677.18 profit in one day at his lemonade stand and was able to present a check for $7,265.28 to his charities of choice and retained a nice savings account of his own.

Matthew went through all the Lemonopolis lessons in 2017 and repeated a few of them in 2018, filled out his Lemonade Day passport and participated in the activities surrounding Lemonade Day. He paid back his loan and turned in his business results form. Matthew was right: He has learned so much about business through Lemonade Day and he inspires us all! He is a delightful enthusiastic young man and a perfect example of the power of Lemonade Day to teach important lessons about business. We are proud of Matthew and believe he is a rock-star for Lemonade Day both locally and nationally.