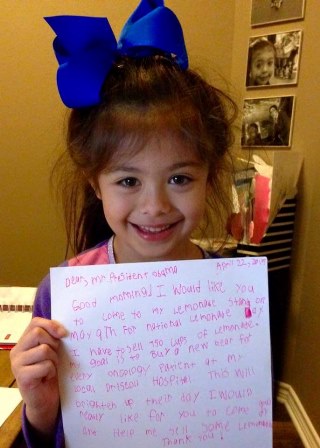 This was Reese’s very first time participating in Lemonade Day! She threw herself into the experience wholeheartedly, even sending a letter to President Obama to invite him to her stand. Her motivation was to raise at least $315 to buy stuffed animals from Build-A-Bear for all of the oncology patients at the local children’s hospital.

Reese’s stand was made up of three areas filled with different items for purchase. Table one served as her lemonade and pink lemonade stand; table two offered limeade; and table three held sweets, cupcakes, cookies and popcorn. The stand was located in the center of the neighborhood park.

Reese didn’t leave anything to chance—from her Lemonade Day lessons, she knew marketing was key. She asked business owners to share pictures of her stand information on social media. She posted flyers around her neighborhood and used the neighborhood’s app to post the event. She took invitations to school and mailed out friend and family invitations. A photo of Reese at her lemonade stand was chosen for the Coastal Bend Mamas’ “cute pic of the week,” which also helped her to advertise. When Lemonade Day finally arrived, Reese worked very hard and had a lot of fun! The best part was...Reese EXCEEDED her goal and raised a total of $590, allowing her to buy the Build-A-Bear animals for the kids at the children’s hospital!