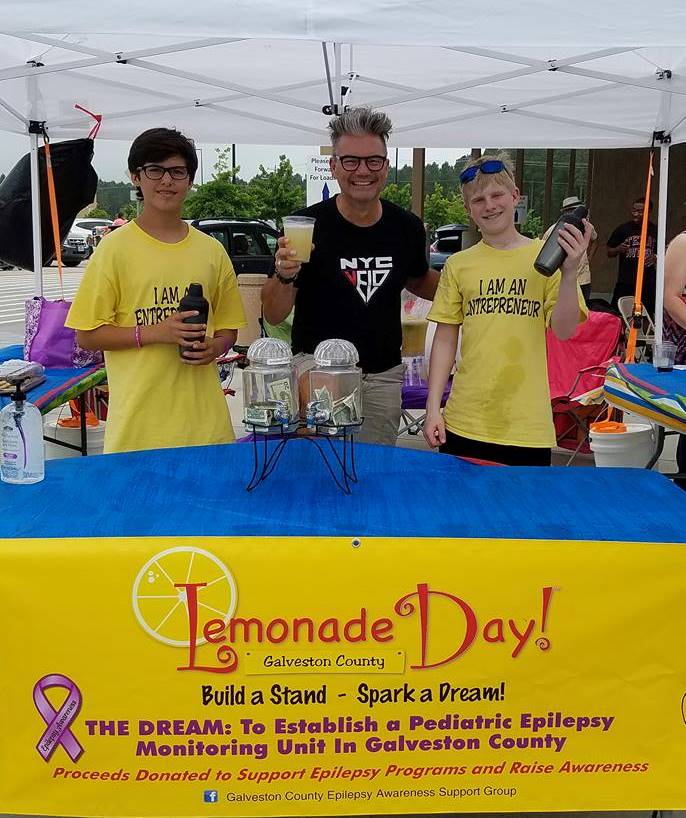 Trysten Pearson and Nathaniel Twohatchett first met at a Galveston Boy Scout troop meeting in 2013 and realized they attended the same school. The boys became fast friends. Sadly, Trysten was diagnosed with epilepsy that same year at age 12. After having many severe seizures at school, Trysten realized he was not alone. Many times, Nathaniel stayed by his side during a seizure, went to get help, or even used the lifesaving technique of “swiping” the implanted vagus nerve stimulator (VNS) device in Trysten’s chest with a magnet after learning first aid. They soon became very close, and Nathaniel naturally became Trysten’s “buddy.”

As Trysten has pursued his passion to raise awareness about epilepsy and become an advocate with the Epilepsy Foundation Texas, his friend Nathaniel has been right by his side, participating with him at many epilepsy events.

In 2015, the boys were introduced to Lemonade Day at school, and Nathaniel was the driving force behind their desire to participate. They thought this would be a great way to raise epilepsy awareness and donate funds to support epilepsy-related programs. After a successful first year, they decided to participate again in 2016.

In addition to making over $1,500 on Lemonade Day, the boys established an incredible goal to work toward Trysten’s dream of bringing a pediatric epilepsy monitoring unit to Galveston County. Currently, because of the severity of Trysten’s epileptic seizures, he has to travel to the nearest monitoring unit, which is in Houston. Trysten and Nathaniel want to work toward funding a unit in Galveston County so that children suffering from epilepsy won’t have to travel outside of the county for the medical assistance they desperately need. The Department of Neurology at the University of Texas Medical Branch in Galveston is now engaged and hopeful that a monitoring unit for children might be in their future.