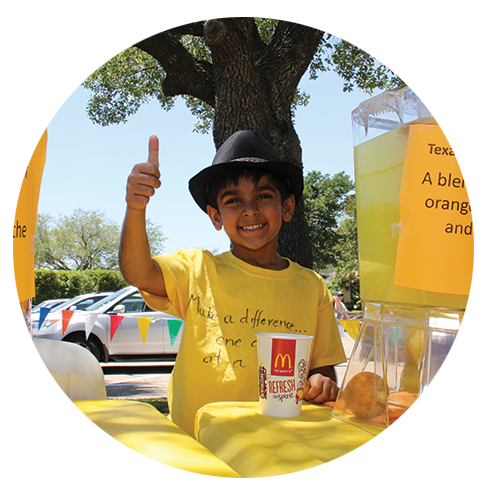 “I am Yash Semlani—7 years old, a 2nd grader and a Cub Scout.  This is the second year that my brother, Jay Semlani, who is 4 years old, and I are doing the Lemonade Day program through TiE Young Entrepreneurs.  This year, we were so excited when Dad told us in March that TiE mentoring was starting early.  I came home from that session with many, many ideas in my head.

The next day, I sat with my mom and dad to read the Lemonade Day book and do the worksheets. When my mom asked me what my goal was, I quickly replied that I wanted to make a million dollars. My parents just smiled and said that was too much money and that I needed to set a reasonable, achievable goal. So I thought some more and said that I wanted to make a thousand dollars. My mom once again said that it was too much. I quickly asked, “Why?” So we did the math together and figured out that to make $1,000 at $2 a cup, I would have to sell 500 cups of lemonade. That was a lot!

On the way to school the next day, my mom asked me, “Why do you want to do the lemonade stand?”, and unlike last year where I just wanted a video game, this year my response was, “I want to help the kids at Texas Children’s Hospital.”  I was born at Texas Children’s, and I wanted to give back a little.

Instead of finding an investor, I decided to focus on pre-selling vouchers because it worked last year and made things more predictable.  However, this year we designed a voucher without a price that clearly showed my cause and what people would get, like lemonade, cookies, and raffle prizes where winners did not have to be present to win.  I was nervous to knock on doors and find out whether people would buy a $25 lemonade voucher to support my cause and help me reach my goal.

That evening after school, I sold 12 vouchers and made $300. Then another thought came to me – if people are buying one voucher, will they buy a two-pack? The next day, I stapled two vouchers together and offered the two-packs and made another $400 in half the time.

Hearing how excited I was about the work, one of my friends, Ananya, asked if she could join me in my lemonade stand. Now we increased our goal to $3,000 and felt confident that we could make it happen.

Ananya, Jay and I recorded our pledge, and our parents posted in online so we could spread the word faster and get people to buy online too using a credit card. I also spoke to several local businesses, who donated boxed lunches and more raffle prizes so we would not have to spend money on food and could increase our profit.

This year, we had four original lemonade recipes and sold 30 gallons of lemonade, 3 dozen cookies, and 300 pre-packed lunches donated from McDonald’s, Boudreaux’s, Russo’s, Papa John’s, Red Dot and more. We had a water slide, a snow cone machine and 15 raffle prizes that were also donated. We had sales of over $5,000 and profits of over $4,500.

My dad asked me what I learned from this experience. There were so many things, and I couldn’t really decide, but I liked something my mom said. She said she loved that every time she put a hurdle in my path and thought that I would stop or think smaller, I instead thought of a way around it. She said what has really helped me reach my goal and pass it is that I believed I wanted to make a difference and that people saw this and they wanted to help me too. I like that lesson. I believe I’m going to start earlier and try harder next year to meet my original goal of a million dollars, and maybe Mom will help me by putting some more hurdles in my path.

Dad says my customers really got value for their money and are sure to return next year. If you couldn’t make it this year, do come next year and help me reach my goal to make a difference, one cup at a time.” --Yash Semlani