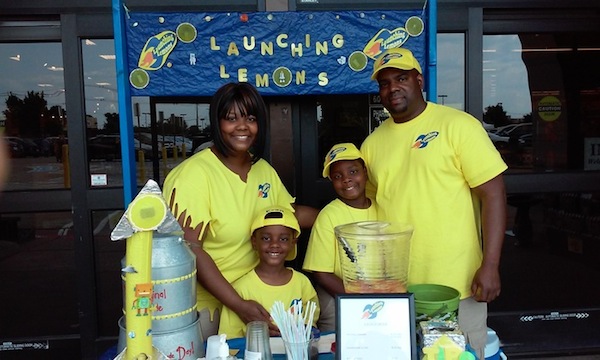 “When life gives you lemons, launch them.”

That’s the unique philosophy of Daryl Ethan Moss, owner of the Launching Lemons lemonade stand. “If tough times enter your life and they keep coming, just launch them off because something better will come,” he says.

Inspired by his grandmother and parents, Daryl poured his concept into the recipe—a healthier version of lemonade, containing chia seeds, organic tea and honey. “The chia seeds have omega-3 fatty acids, carbohydrates, protein, fiber, antioxidants and calcium, which helped my lemonade explode—in a healthy way,” he says.

Next year, he plans to come up with more healthy lemonade flavors and perhaps a healthy snack. Additionally, he would like to sell by the gallon and hire workers to manage more lemonade stands.

Once he settled on this year’s lemonade recipe, Daryl spent time squeezing fresh lemons and decorating his stand with repurposed materials from his dad’s job, as well as lemons, robots, stickers and spaceships. He also solicited support and donations by writing letters to the managers of several retail stores, social media outreach, passing out business cards and word of mouth.

He enjoyed talking with family and friends about his business, as well as meeting store managers and even juicing lemons late at night. What he found challenging was creating a theme and slogan that would set him apart from others and, later, setting up and breaking down his stand.

Daryl’s slogan was also inspired by his charity of choice, the S.P.C.A. “I like helping animals find nice homes and medical care,” Daryl says.

He credits part of his success to mentor Susan Phillips and the Kidpreneurship program, which helped him prepare for Lemonade Day. Now he takes away valuable lessons to build on his experience and share with others.

He advises kids to “make a plan, do your research, make a great product and be dedicated to your business. Have fun doing it and have a good attitude.” He also recommends kids work hard to develop a plan of action and be nice to their customers.

Daryl met a lot of notable people that day, including the celebrity judges who awarded his recipe.

“I was a little nervous, but my favorite part was winning and working with my little brother because this was our first year participating in Lemonade Day,” he says.

If you participated in Lemonade Day, please share your experience with us! Fill out the online form here: http://bit.ly/1zNhaX5.