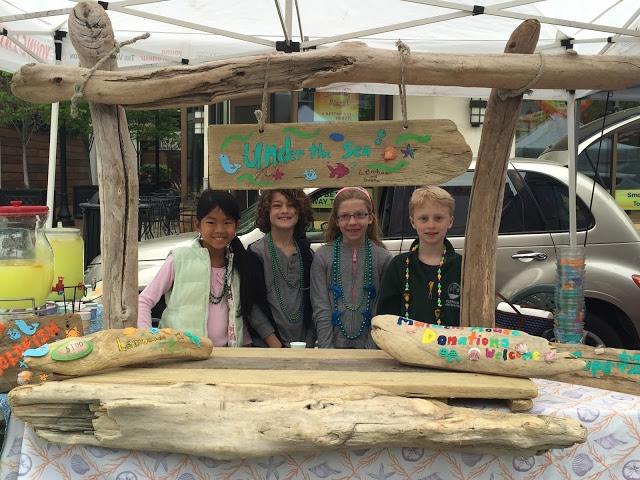 A group of second and third graders from the West Side Young Entrepreneurs Club selected Under the Sea as their theme for the 2016 Lemonade Day. They scoured local Lake Erie beaches for debris following thunderstorms looking for driftwood to create and decorate their stand. On shopping day, one team member said “Let’s make the lemonade blue to go with our theme”; he was quickly countered by another team member who said “but what if people are allergic to blue lemonade, then they won’t buy any!” Even without the blue lemonade, they found ways to connect their theme to their product. They offered a special “package,” which included a larger cup decorated with aquatic designs, paired with fish crackers - all for $2. A regular cup cost $1. This team delegated Selling Day responsibilities very deliberately and each person had a specific role (filling the cup, handing to customer, collecting money, etc.) It was fun to see how each of them took great care to “own” their roles, while also working collaboratively as a team and helping each
other with whatever needed to be done. At one point when the line was five customers deep, one team member called out, “We got this!”
Choosing a charity for their sharing goal came easy to this team. They were familiar with the work of the Malachi Center of Cleveland because one team member’s grandfather had helped them establish a shower program for the homeless; a place where they can shower, wash their clothes, and get free toiletries. The kids hand delivered their donation to the Malachi Center and got a tour of the facility. It was meaningful for them to see what a luxury it is to just bathe, brush their teeth, and have clean clothes; this part of the experience left a deep imprint on our team and I received letters from kids asking to do it again next year.