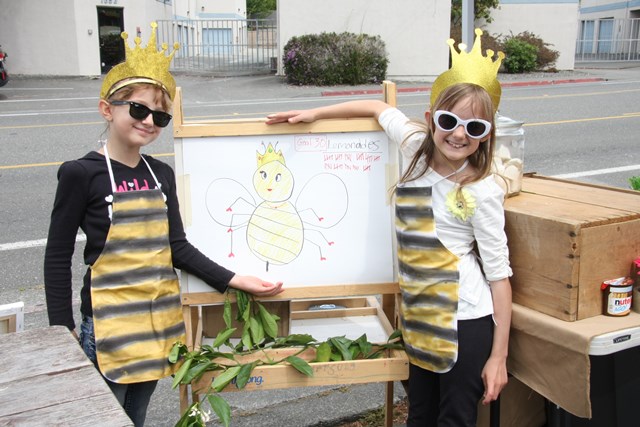 Two Queen Bees, Rubee and Olivia, both 9 years old, had their first Lemonade Day stand this year. When asked why they decided to participate they said, “We LOVE lemonade. We really, really like honeybees. We mostly love honey lemonade and we wanted extra money.” Like so many young entrepreneurs, they had been pretending to run stores and restaurants as part of their regular play. One time, they had a sleep over and each girl opened a “store” for their rabbit in their living room. The goal was to see who could get the rabbit to hop over to their store more often. Rubee once had an orange juice stand. It was excellent orange juice, made with “oranges so sweet; they didn’t even use any additional sweetener.” They made about $20 gross. They learned a lot about marketing and business with their orange juice stand.

For their lemonade stand this year, they worked with a mentor, Jennifer-- the owner of her own businesses for over 20 years and founder of Humboldt Roller Derby. She had five “business meetings” with the girls where she helped them understand business concepts and plan their stand. She originally worked with just Rubee, but after two meetings Rubee realized the business would be too much to handle on her own, so she recruited Olivia to help out.

In Humboldt County, we encourage the kids to sell more than lemonade. They took that to heart. They sold organic honey lemonade with infused simple syrups: honey, berry, lavender and mint, lemon honey cupcakes, bath bombs (sold on consignment), and original art --postcards and paintings. Lemonade sold for $4 cup! My son, who was a VIP visited this stand last in his group of eight stands. He told me he thought, “Dang, for $4 this better be good lemonade!” Then after drinking it, he said, “Totally worth it.” The art cost $2 for 4 postcards; $5 small paintings and $10 for large paintings. In the 5 hours that their stand was open, they sold all of their lemonade and all but 2 cupcakes and 1 pack of postcards. The girls decorated their stand with art and even wore homemade aprons to look like bees. They posted their business plan for everybody to see. They handed out flyers at school, hung them up in businesses around their stand location and had a Facebook page. They made over $300 in profit, which they saved and shared with a local animal shelter. They haven’t spent any of their money, yet.

I heard that at the end of the day Rubee said, “Today was so grand! I want to be here forever!” But, when they went to dinner, she said, “I think I’m too tired to chew.” When I asked them about what’s next, they immediately started throwing around ideas: First, they said they wanted to bring in their third friend who was out of town last year. At times, they had 10 people in line and could have used a hand.

Then they started talking about new items to sell:

• Their friend and her mom make jewelry. They can make trinkets and jewelry to sell.

• They could partner with another business, like with the bath bombs, and sell jars of honey.

• They could make beeswax candles.

Each new idea had both of them jumping up and down with excitement.

Every VIP, or community member I talked to who visited multiple stands said they did an amazing job. Their presentation was great, with the decorations and costumes. Their marketing was wonderful -- they had their information out way before the event. Their salesmanship was fabulous. They knew their product had value and they were happy to tell you why. At the end of the day they made $482 gross, they sold 65 cups of lemonade, 20 bath bombs, 10 4-pack of art cards, 3 original art pieces, 20 individual art cards, and received $82 in tips. The success they experienced has them hooked; they can’t wait until next year!