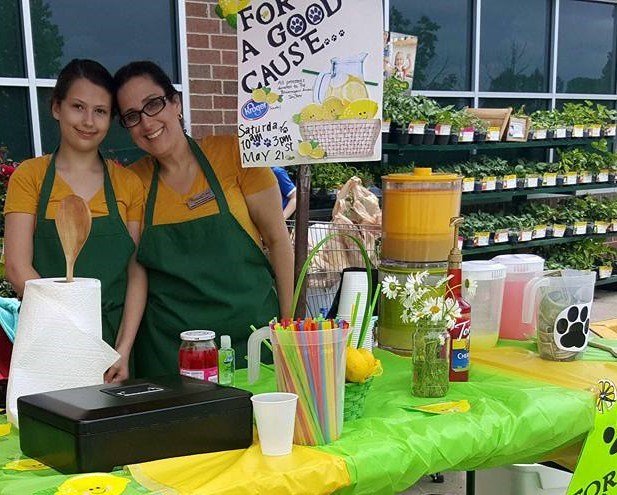 I participated in Lemonade Day because I wanted to help the animals at the Bloomington Animal Shelter. I decided to donate all of the proceeds from my lemonade stand to the animal shelter.  I did this last year on Lemonade Day too. This year I gave the stand a name...Paws for A Good Cause and I had my stand located at Kroger South.

I had a collection of four different lemonades.  My first flavor was a sparkling pineapple lemonade that
consisted of lemonade, pineapple juice and Sprite. My second was regular yellow lemonade which was made
with old fashioned lemonade mix and water. My third flavor was pink lemonade and it contained pinklemonade mix and water. My final lemonade was a diet lemonade which was made from diet lemonade packets.  There were also maraschino cherries for the drinks, as well as a wide range of colorful straws for people to choose from.  In addition to selling my lemonade, I also sold cupcakes ahead of time.  This was an extension to the lemonade stand from last year because we wanted to reach more customers. The cupcakes were $3 for a pack of two. We sold  chocolate cupcakes with peanut butter frosting and a salted caramel drizzle and chocolate cupcakes topped with a chocolate buttercream. I enlisted my mom to assist with the baking.

Our slogan was... Paws for a Good Cause.  I advertised by creating signs and putting them up at Kroger, as well as at my lemonade stand.  My brother and I asked our principals if we could sell cupcakes to the teachers and staff at Summit Elementary School and University Elementary School.  The secretaries even sent out an email to help us advertise.

I had a lot of fun and I think that my sparkling pineapple concoction was a big hit!  Next time I think that Iwill be a bit more prepared for when Lemonade Day rolls around and I want to make sure to advertise earlier. I did learn one thing from last year which was to put the ice in the cups themselves and not in the containersso the lemonade does not get watered down.  I also learned that I need help.  An assistant is good to havewhen getting things done.Now that I have been an entrepreneur for two years,I think that I will continue to do Lemonade Day inthe future.  I want to continue to expand the reach of my stand in the years to come.

Don't miss out on the fun! Check back for details on Monroe County's next Lemonade Day in 2021!