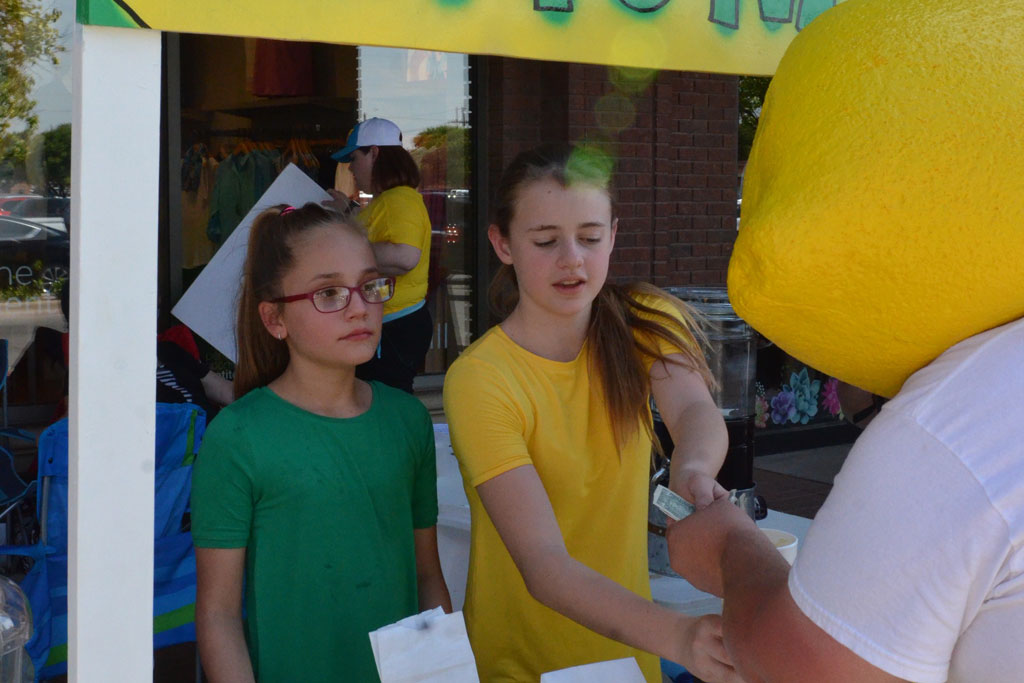 Rebekkah Kuhn, a Lemonade Day firecracker, is one of our 2017 scholarship recipients who stood out to us. Rebekkah and her friend, Anna, work closely to plan the success of their business; every year they up the stakes to make things more visually appealing and to provide easier access to the products. We were very impressed by the excellent performance of the stand as well as their efforts to keep up with the times. Running low on cash on Lemonade Day? No problem - Rebekkah’s stand accepts credit cards. That’s right; this Lemonade Day veteran has been offering a way for customers to pay without cash since 2012! Her innovative spirit is one of the many reasons she stood out as a Lemonade Day participant.

In 2017, Rebekkah and Anna opened up their  “R&A Lemonade” stand from 10 am until 5 pm, offering tasty lemonade, sweet and unsweet tea, Arnold Palmers (tea mixed with lemonade), chocolate chip cookies, and mind-blowing lemon cookies. The goodness isn’t limited to her stand hours as Rebekkah also took pre-orders before Lemonade Day to get a better idea of how much demand she had for her product. What a smart idea! Not only were the pre-orders successful, but they also took over with 80 DOZEN pre-orders. After the pre-order, they made an additional 40 dozen lemon cookies to sell at their stand on Lemonade Day, which sold out within 5 hours. That’s a total of 960 cookies sold! With the money earned from Lemonade Day, they chose to donate $100 to Paul’s Project, which helps homeless people in the Lubbock community. Because the charity does not typically get many cash donations, Rebekkah and Anna wanted to be supportive and help positively impact in the community.

Throughout her years participating in Lemonade Day, Rebekkah has learned many lessons about entrepreneurship. One big lesson she learned was how important location could be. Rebekkah’s signature stand location at Kingsgate has been one she has reserved since the very first Lubbock Lemonade Day. In 2016, to her surprise, she learned that someone had already reserved that same spot before her. Faced with a new challenge, they decided to pick a new spot that year and persevere, and their stand still did an outstanding job. Rebekkah’s competitive spirit had no intention of stopping there. She reached out to Graco, the company that owned her stand location, and requested to reserve her Lemonade Day stand location for the next ten years! Hesitant at first, the real estate company did not agree to reserve it for the next decade, but they did agree to institute a First Right of Refusal for her stand, as long as she calls and reserves it by January 31st each year. That meant that as long as she called to reserve her spot each year before January 31st, she would be able to secure own spot for Lemonade Day.

Lemonade Day has given Rebekkah an undeniable drive for business. Ever since she realized that she can earn her own money, she has been empowered to work diligently for the things she wants. A self-proclaimed saver, Rebekkah has been able to keep some of the money she has made from Lemonade Day throughout the years for future business endeavors. But she doesn’t stop at Lemonade Day, Rebekkah is continually stirring up new business ideas that she plans to bring to life. She has even thought through future marketing strategies such as flyers and posters to promote her ideas.

Rebekkah’s mind is already set on where she’d like to attend college. She says that Texas Tech University is her dream school. If she ends up going to school at Texas Tech, she would be a fourth-generation Red Raider! We are so excited to see the big things Rebekkah will accomplish with her go-getter attitude. Congratulations Rebekkah - keep making us proud!